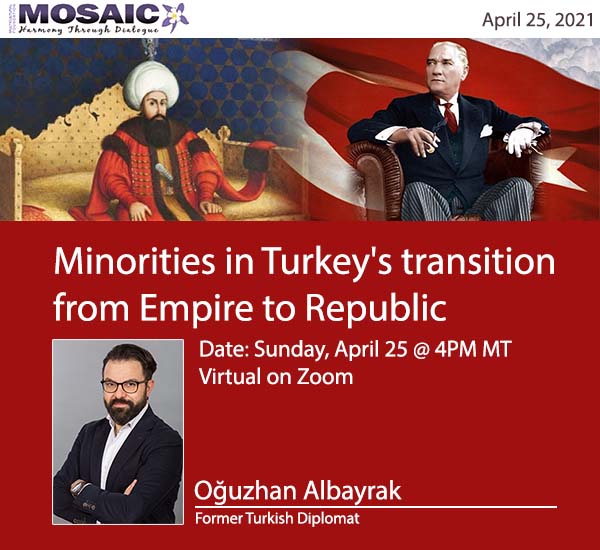 On Sunday, April 25th former Turkish Diplomat Oğuzhan Albayrak gave a talk on minorities in Turkey’s transition from empire to republic. Mr. Albayrak gave an overview of minorities that lived in the Ottoman Empire such as Greeks, Armenians, Jews, Kurds and Alevis. He provided detailed information about the issues and the root causes minorities faced in the Ottoman Empire and the Republic of Turkey.
Albayrak also presented reform attempts that were introduced to address the rights and freedoms of minorities.

Below you can find the recording of Albayrak’s talk:

Oğuzhan Albayrak:
Having graduated from Public Administration, Oğuzhan Albayrak started his career as a diplomat agent in the Ministry of Foreign Affairs of the Republic of Turkey in 2009.

As a Junior Diplomat he served in the General-Directorate of Bilateral Political Affairs – Europe and the General-Directorate for the European Union. He was assigned to the posts in various embassies of Turkey in Kuwait and Azerbaijan, respectively. He was dismissed from his position in February 2017 as a result of the massive political purge by the Turkish government against the dissidents. He is currently living in exile in Germany and is the Executive Director of the Human Rights Defenders e. V. (HRD) Association.