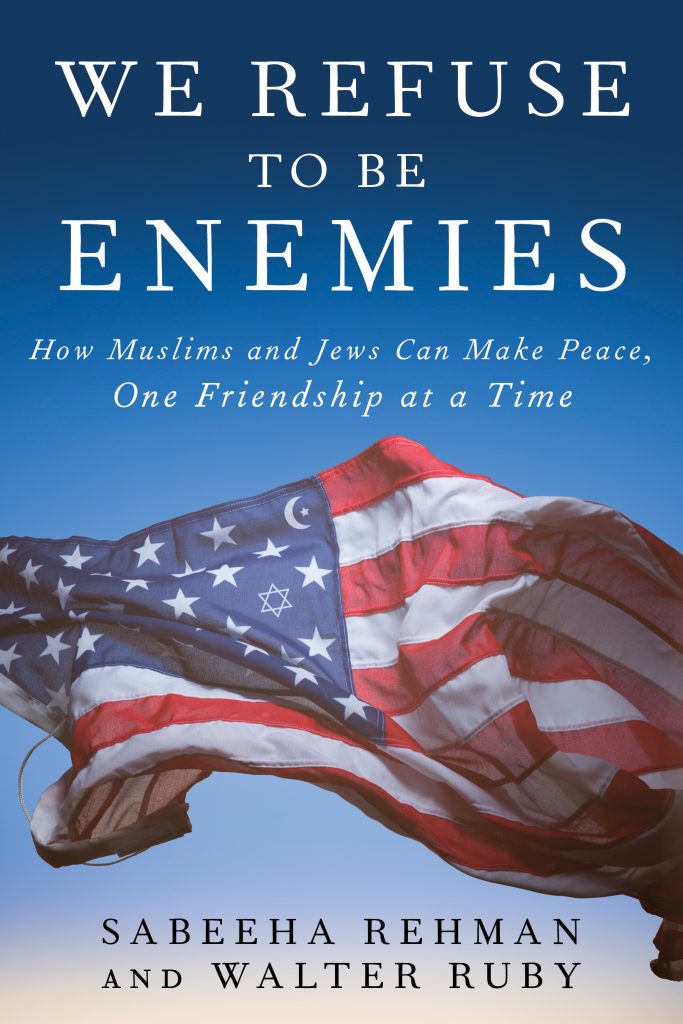 Mosaic hosted on May 23rd a virtual program on the book “We refuse to be enemies – How Muslims and Jews can make peace” with a discussion by the authors Sabeeha Rehman and Walter Ruby.

We Refuse To Be Enemies – How Muslims and Jews Can Make Peace, One Friendship at a Time By Sabeeha Rehman and Walter Ruby We Refuse to Be Enemies is a manifesto by two American citizens, a Muslim woman and Jewish man, concerned with the rise of intolerance and bigotry in our country along with resurgent white nationalism. Together, Rehman and Ruby have spent decades doing interfaith work and nurturing cooperation among communities. They have learned that, through face-to-face encounters, people of all backgrounds can come to know the Other as a fellow human being and turn her or him into a trusted friend. In this book, they share their experience and guidance. Growing up in Pakistan before she immigrated to the United States, Sabeeha never met a Jew, and her view was colored by the Israeli-Palestinian conflict. In his youth, Walter never met a Muslim, and his opinion was shaped by Leon Uris’s Exodus. Yet together they have formed a friendship and collaboration. Tapping their own life stories and entering into dialogue within the book, they explain how they have found commonalities between their respective faiths and discuss shared principles and lessons, how their perceptions of the Other have evolved, and the pushback they faced. They wrestle with the two elephants in the room: the Israeli-Palestinian conflict and polarizing material in their holy texts and history. And they share their vision for reconciliation, offering concrete principles for building an alliance in support of religious freedom and human rights. “As members of the two largest minority faith communities in America, we must stand together at a portentous moment in American history. Neither of our communities will be able to prosper in an America characterized by xenophobia and bigotry.” — Sabeeha Rehman and Walter Ruby About the Authors: Sabeeha Rehman is an author, blogger, and speaker on the American Muslim experience. Her memoir Threading My Prayer Rug: One Woman’s Journey from Pakistani Muslim to American Muslim, was shortlisted for the 2018 William Saroyan International Prize for Writing, named one of Booklist’s Top Ten Religious and Spirituality Books of 2016 and Top Ten Diverse Nonfiction Books of 2017, awarded honorable mention in the 2017 San Francisco Book Festival Awards, Spiritual Category, and chosen as a 2019 United Methodist Women’s Reading Program Selection. Excerpts from her memoir were featured in the Wall Street Journal, Salon.com, and Tiferet. Since the publication of her memoir, she has given more than 250 talks in nearly a hundred cities, at houses of worship, academic institutions, libraries, and community organizations, including the Chautauqua Institution, where her lectures have been sold out. Sabeeha has given talks on the art of memoir writing at academic institutions including Hunter College, New York. She is an op-ed contributor to the Houses of Worship column of the Wall Street Journal and New York Daily News. She lives with her husband in New York City. Walter Ruby is a veteran activist in Muslim-Jewish relations. Since 2008, when he became Muslim-Jewish program director at the Foundation for Ethnic Understanding, he has organized hundreds of twinning events, bringing together tens of thousands of Jews and Muslims in more than thirty countries on five continents, including members of mosques and synagogues and Muslim and Jewish organizations. Ruby has worked as a journalist for more than forty years, mainly for American Jewish and Israeli publications, including the Jerusalem Post, London Jewish Chronicle, Long Island Jewish World, Forward, Maariv, and New York Jewish Week. In addition, he has published articles and op-ed pieces in the New York Times, Wall Street Journal, USA Today, New York Daily News, Los Angeles Times, Christian Science Monitor, Dallas Morning News, and many other venues. He serves as executive director of Jews, Muslims and Allies Acting Together (JAMAAT), a Washington area grassroots interfaith group, and lives in Washington, DC.