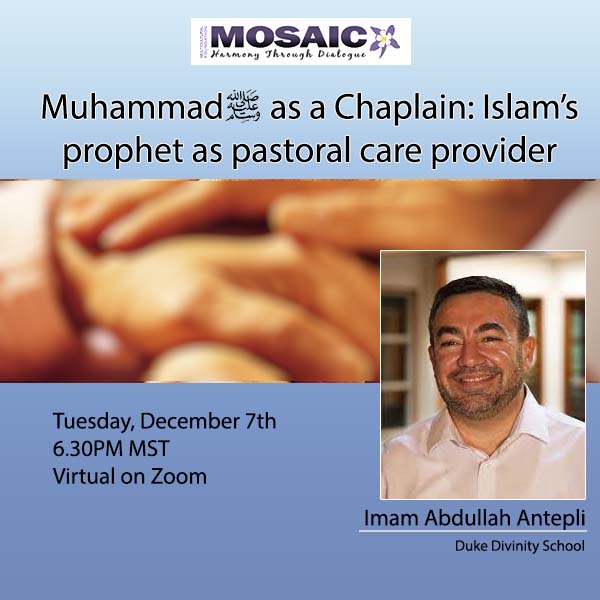 Imam Abdullah Antepli shared with the audience how much Prophet Muhammad(s) cared about humanity. He gave examples how professionally the Prophet(s) engaged with his community; he didn’t judge anybody.

Imam Antepli is a globally acknowledged scholar and leader of cross-religious and cross-cultural dialogue in American higher education and in non-profit world. He has built multiple organizations and initiatives to facilitate religious and spiritual life across America’s college campuses, sowing seeds of understanding between religions while upholding their cultural integrity and dignity. In July 2019, Antepli joined the Sanford School of Public Policy as associate professor of the practice, with a secondary appointment at the Divinity School as associate professor of the practice of interfaith relations.

From 1996-2003 he worked on a variety of faith-based humanitarian and relief projects in Myanmar (Burma) and Malaysia with the Association of Social and Economic Solidarity with Pacific Countries. From 2003 to 2005 he served as the first Muslim chaplain at Wesleyan University. He then moved to Hartford Seminary in Connecticut, where he was the associate director of the Islamic Chaplaincy Program & Interfaith Relations, as well as an adjunct faculty member.

He previously served as Duke University’s first Muslim chaplain and director of Center for Muslim Life from July 2008 to 2014, and then as Duke’s chief representative for Muslim affairs from July 2014 to 2019. He was also the associate director of the Duke Islamic Studies Center from 2014 to 2015. Professor Antepli is also a senior fellow on Jewish-Muslim Relations at Shalom Hartman Institute in Jerusalem, where he founded and co-directs the widely recognized Muslim Leadership Initiative. The NonProfit Times recognized Imam Antepli as one of their Power & Influence Top 50 leaders of 2019, calling him one of the most prominent Muslim leaders in higher education today. As a Muslim-American imam and one of the very few scholars bridging faith, ethics, and public policy, and as someone who was born in Turkey and lived in three different countries, Antepli offers the academy an important element of intellectual, ethnic, religious and cultural diversity.